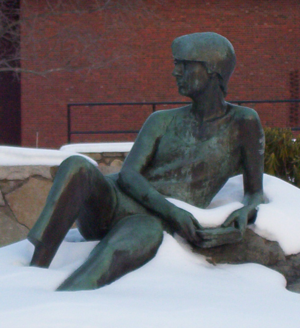 Saint Phil of Worcester is the patron saint of procrastinating college students. He is known for having driven all the East Bugs out of Brandeis University.

(Story of Saint Phil, written by Jonathan North Washington, dedicated to those who have lost a pie to the east bugs.) 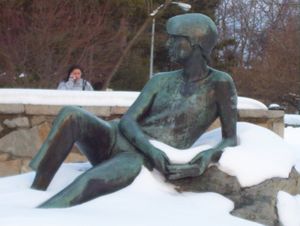 Saint Phil's story begins when he was student at Brandeis and Goldfarb Library was much younger (though this has little significance to the story).

Actually, it begins 20 years before that, in the ghettos of Worcester where Phil grew up, the offspring of countless generations of exterminators on both sides of the family. When he was but a wee lad, there wasn't a household pest Phil couldn't defeat; even by the time he was in the 6th grade, he had depestified not only his school and all his friends' houses—not a bug or rodent dared enter any place he'd been!

By the time Phil got to Brandeis, he'd had experience with hundreds of species of insects and rodents. Not a day after he'd been on campus, he heard from his room in North Quad ominous rumours of pests coming from the direction of East Quad. He talked with all his friends about it, and they were really excited that they could count an exterminator among their fellow students. But alas, Phil was soon loaded down with homework and papers from his UWS and USEM classes (not to mention Syntax and Chem lab!), and never got a chance to get over to East to check it out.

And then one day in March, the chance finally arose. Phil met Philina in Sherman, and they struck it off that day over a warm lunch. Phil walked her back to her room in the basement of Pomerantz in East, and talked more with her. They had just exchanged roomphone numbers when Phil caught a scent in the air he hadn't smelled since....

But it was too late. He hadn't noticed the east bug creeping up behind Philina until all that was left of her were two pairs of tennis shoes and an American Studies textbook. Phil, distressed and confronted with a still hungry east bug shouted at the top of his lungs, "I shall avenge you, Philina!"

With that, Phil grabbed the leftover American Studies textbook and fashioned it into a powerful east-bug-killing spear, thrusting it through the east bug's head. The east bug, with one last pathetic roar, turned belly-up and died.

Phil was sad. Had he come to East sooner, he not only would've saved Philina from her tragic fate, but he would've met her earlier. Apparently the giant pest had been living under Philina's roommate's bed, thriving on an abandonned pumpkin pie since thanksgiving. That's what Phil had smelled when talking with Philina—oh yes, he was familiar with that smell—the smell of 4-month-old pumpkin pie processed by an insect.

"What have I dooone?!" screamed Phil with distress into the late-winter afternoon. He had met the girl of his dreams, only to lose her to an east bug he could have easily exterminated months earlier. He vowed to destroy all east bugs at Brandeis. But that evening, while he was digging through a janitor's closet in North for the right chemicals, the God of Scutigera coleoptrata set off a fire alarm, causing Phil to drop all the chemicals, which, with the fire alarm as a catalyst, turned him immediately into a copper statue.

Later that night, a janitor found the copper statue, and sold it to the University for the promise that Ridgewood would forever be endlessly stocked with toilet-paper and would never be torn down. The next morning, the statue was planted in front of the library by the unwitting administration.

It is said that that very afternoon, on the one-day anniversary of Philina's death, Phil unsolidified himself from his awkward chemical-dropping position, and went all across Brandeis squashing east bugs. Later that evening, on the one-day anniversary of having become a statue, it is thought that Saint Phil returned to the library, and lay down in a reclined position in the spot where he had stood the night before.

And so, with Saint Phil of Worcester being encased in copper by the library, immortalised for generations of Brandeis students to remember him, we celebrate the anniversary of his story of woe and tragedy on March 18th every year, and on March 19th, we celebrate his return and subsequent victory over the east bugs.

The Ballad of Saint Phil