Notice: Trying to access array offset on value of type null in /data/server/wiki.firespeaker.org/includes/profiler/SectionProfiler.php on line 99

Notice: Trying to access array offset on value of type null in /data/server/wiki.firespeaker.org/includes/profiler/SectionProfiler.php on line 99

Notice: Trying to access array offset on value of type null in /data/server/wiki.firespeaker.org/includes/profiler/SectionProfiler.php on line 100

Notice: Trying to access array offset on value of type null in /data/server/wiki.firespeaker.org/includes/profiler/SectionProfiler.php on line 100

Notice: Trying to access array offset on value of type null in /data/server/wiki.firespeaker.org/includes/profiler/SectionProfiler.php on line 101

There's an svn repository that me and Tristan are now using to maintain what exists of Trōhēnnu.

Trōhēnnu is a project started by Jonathan North Washington, with a certain amount of input and support by Tristan Alexander McLeay (and later by Michael Meservy).

Trōhēnnu will store vocabulary for any number of languages, as well as store sound change mappings between related languages. For example, one could store Latin vocabulary and Spanish and French vocabulary, as well as mappings of the sound-changes between them. When viewing Latin, one could look at all the forms derived from vocabulary, and when viewing Spanish or French, one could see the source for vocabulary. One could also check easily (by colour coding or some similar feature) whether the sound changes provided accurately provide the derived form.

This is useful for historical work in natural languages and conlangs alike; in conlangs, one could derive whole lexicons through the click of a button (after setting up the sound changes, and maybe remapping some vocabulary).

Something similar seems to exist? Further investigation is required. Wordcorr

Trōhēnnu's core is a group of lexical databases and sound change databases, which a sound change applier and some GUI management can manage.

Aside from being a database and tool to do comparative/historical linguistics, nice graphs should be outputtable. Ghoul will do this.

The currently intended design of trōhēnnu consists of

The backend for Trōhēnnu will integrate a database consisting of [for various languages] vocabulary, various forms of the vocabulary (such as conjugated and declined forms, derivable by rules just like other words), sound changes, and vocabulary/sound change mappings (between languages) with a sound change applier and an XMLRPC interface providing numerous functions for manipulating the database contents and applying sound changes.

Any number of clients could be written, since the infrastructure for data manipulation is built into the server: clients can be web-based, GTK-based, Cocoa-based, or whatever. Following are some conceptions of how certain functionality would work in a client.

The following conception of a sound change editor window has four quadrants. 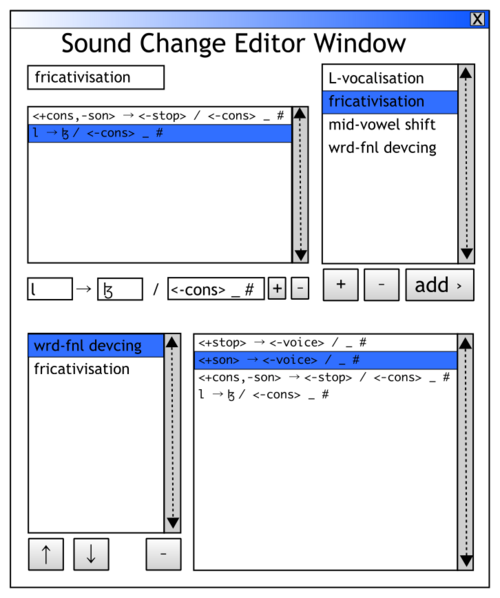